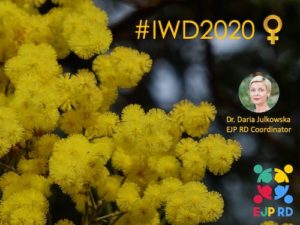 March 8th is the International Women Day, EJP RD is pleased to support the global campaign by sharing its support to all women. Gender equality is particularly important in science, where the gap is still present. In the past years, the EU has put in place formal regulations to ensure equal opportunities, however “female researchers remain significantly under-represented in many areas of scientific research”.

Indeed, EU-funding have been used to support actions aimed at creating a more gender-balanced research culture in Europe. The EJP RD consortium is a great example of such EU effort and attention toward this situation, since the Coordinator is Dr. Daria Julkowska and there is a gender balanced representation among the leaders. Change is possible if we all work together. Thank you EU for supporting women and gender equality. Here is the official statement recently released by the EU Commission: “Regendering science for a more inclusive research environment“.

In recent years, the European Union has been actively supporting equal opportunity across many areas in science and technology. Despite this, gender inequality in research – particularly in the STEM fields (science, technology, engineering and mathematics) – is still widespread.