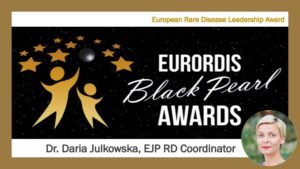 Today is the day: The 9th edition of the Eurordis Black Pearl Awards event is just a couple of hours away!

The EURORDIS Black Pearl Awards is an annual awards ceremony which takes place in Brussels in February to launch the month of Rare Disease Day. Since 2012, EURORDIS-Rare Diseases Europe has organized this event to recognize the major achievements and outstanding commitment of patient advocates, patient organisations, policy makers, scientists, companies and media who strive to make a difference for the rare disease community. The event is called “Black Pearl” because “the formation of a natural black pearl is extremely rare – just like these pearls, the recipients of the EURORDIS Black Pearl Awards are unique and deserve our recognition and admiration”.

The EURORDIS Black Pearl Awards takes place in February to launch the month of  Rare Disease Day, an international awareness-raising campaign for rare diseases, led by EURORDIS. During February, thousands of events take place in over 90 countries and regions, uniting millions of people living with a rare disease worldwide.

For the third consecutive year, Dr Carrie Grant will be the Master of Ceremony.

Congrats to the EJP RD Coordinator, Dr. Daria Julkowska for having been the recipient for the European Rare Disease Leadership Award.

You can follow the event in live streaming by clicking here.